Aikido is a Japanese Martial Art created and developed by Morihei Ueshiba (1883 – 1969) which emphasises harmonisation over contention when dealing with aggression and conflict. What does this mean in practice? That our intent, and consequently our actions, in dealing with aggression (whether physical, verbal or otherwise) is not to take a position of resistance or struggle but rather join with the force of the opposing party, making it our own before leading it into a resolution where it’s energy and ideally, it’s own aggressive intent, has been neutralised.

This ideal of moving from a situation of conflict to its harmonious resolution must be realised through our whole being and reflected in our actions and particularly our actions when under pressure which is when they are most critical. Through confrontational and physical training we learn gradually to let go of our reactive tendency to defend, block and struggle and instead open up to the power of being open and undefended.

In remaining open under pressure we are in a far better space to ascertain more accurately what is actually the reality of a given situation and in remaining loose and free from fearful defensive postures we are in a better place to respond with greater flexibility and freedom of choice.

The direction of development in Aikido is thus from blind reactivity which is limited and controlled by our basic sense of self survival and to awakened responsiveness where we understand that in simply winning or defeating the other we are ultimately defeated ourselves.

It is this ethical dimension in consciousness that makes Aikido unique as a martial art – and so relevant to our daily lives beyond the technical practice in the Dojo.

Jikishin kore no dojo (“If the mind is right, everywhere is a dojo”).

(This phrase -JIKI SHIN KORE DŌJŌ – in Japanese, is attributed to Yuima, a great layman who was considered an enlightened teacher during the early stages of Buddhist development in India.  The story goes that Yuima claimed to have come back from the dōjō where he had attained enlightenment. A young monk asked Yuima: where was this dōjō? The young monk told Yuima that he wished to go to this place and attain enlightenment as well. Yuima then answered: Jiki Shin Kore Dōjō, telling the young monk that the dōjō which he had returned from was not a building or a place but his straightforward mind). 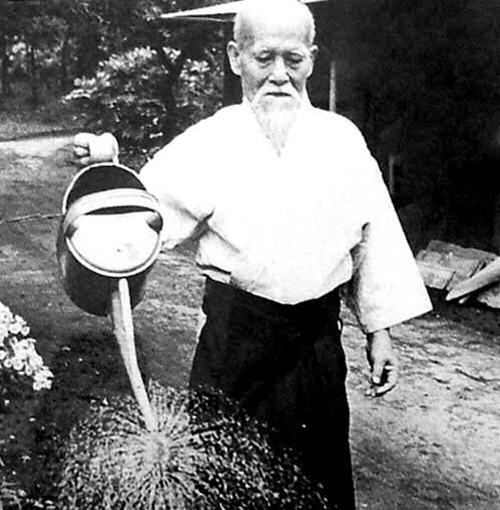