All classes begin and end with a formal etiquette (reigi) whose meaning is to contain the training experience within the bounds of attention, trust and respect.

These are the essential ingredients in creating an atmosphere within the Dojo where practitioners can put each other under pressure in a safe way without letting the practice stray into areas of competitiveness or loss of control.

The basic structure of a typical Taijutsu (empty handed technique) Aikido class is generally as follows:

The format for beginning and ending classes is the same as was done in the Founder’s Dojo in Iwama:

The first bow is a formal bow to the Shomen (‘Head’ of the Dojo where the calligraphy and photos of O Sensei and Morihiro Saito Sensei are placed) whereby we pay our respect to these great teachers that came before us.

The second bow is between Teacher and students.

The third bow is between students at the start of the first technique.

The bowing should not be understood only as a gesture of respect but also one of ‘horizontalizing the ego’. We begin practice putting ourselves aside. There is no competition in Aikido and we train seriously with each other and never against each other with the purpose of being better than or feeling superior to another.

This consists of a series of stretches and movements whose main focus is to ‘open up’ and free the body (joints, fascia, muscles) and feeling-attention (awareness).

Is the practice of undoing our fear of falling and allowing us to discover the experience of being dynamically centred even as we physically lose our balance. This is an essential skill in Aikido as practice teaches us that as we lose our balance we tend to reflexively stiffen up. This would seem completely natural to do at first, however it is just at those moments as we engage with a destabilising force that threatens our balance, that stiffness inhibits our ability to respond appropriately. This learned and ingrained pattern of resisting must be met and overcome in Aikido.

This is the same as when learning to surf a wave. The wave threatens to overwhelm us and stiffening and resistance ensures a hard encounter with the water. Working ‘with’ the wave we ‘lose’ our balance yet stay centred and can ‘ride’ the wave without resisting it. It’s power becomes our ride to the shore. In Aikido it is precisely the same: we ‘receive’ and ‘flow with’ the attacks (as nage) or techniques (as uke) of our partner and in so doing, are actually training our ability to engage in a centred and non-resistant way with experience itself. ‘Resistance’ is eroded by this practice.

The actual meaning of the Japanese term (ukemi) is not falling per se but ‘receiving body’. This implies that in ‘falling’ we do not resist the loss of balance but ‘flow’ and adjust with it to change our relationship with either the ground or our partner – thus effectively protecting ourselves. It’s all about balance.

Forms the core of each class. The format for training techniques is as a ritualised agreement (kata). This is a traditional Japanese format whereby the roles of attacker (uke) and defender (nage) are fixed, and at basic levels of training, the technique is also decided upon beforehand.

Partners practice taking turns being both attacker and defender. As attacker, uke commits an attack within the range of the defender, nage, to respond to and absorb. The energy of the attack is harmonised with, joined, and turned back upon the attacker in the form of the particular technique being practiced. It is now the attackers turn to practice non-resistance (ukemi) as he flows with the technique into the resolution which is either a projection (nage waza) or a ground immobilisation (osae waza).

So the practice of ritualized ‘attack and defense’ is actually a practice of learning how to ‘surf the waves’ through opening up to non-resistance as a strategy of engagement and understanding how to join with the rhythms of fullness and emptiness present in all movement and change.

The attack (yang) is absorbed (yin) by the defender and returned (yang) to the attacker in a technique who now absorbs it it through ‘receiving’ (yin). Whether attacking or defending the key practice is blending and non-resistance, flowing back and forth between yin (receptive) and yang (projective).

Techniques in Aikido are not just simply ‘techniques’ in the commonly understood meaning of the term but actually represent – and make tangible – the defining spirit of Aikido. Every time we practice a technique with presence and intention to fulfil the basic principles of the art we are in fact embodying the spirit of Aikido to the best of our ability in that moment.

The paradox of training is that we learn Aikido though technical practice but Aikido itself is neither constrained nor defined by techniques. The term Takemusu Aikido can also be understood to refer to the ‘source of technique’.

However to belittle technical practice as ‘inferior’ and to focus on the Principles and Philosophy as ‘superior’ without being able to ground it in action is a mistake. To focus only on technique with no understanding of the Principles is also a mistake and leads to a shallow embodying of Aiki.

Techniques are the tangible forms of the Principles of the art and as such Technique and Principle are inseparable.

The Principle of Balance should be a guiding principle not just in practice where we seek to balance Techniques with Principles but in our whole approach to the art – and to life in general.

Formal ending (the same as at the start of class) 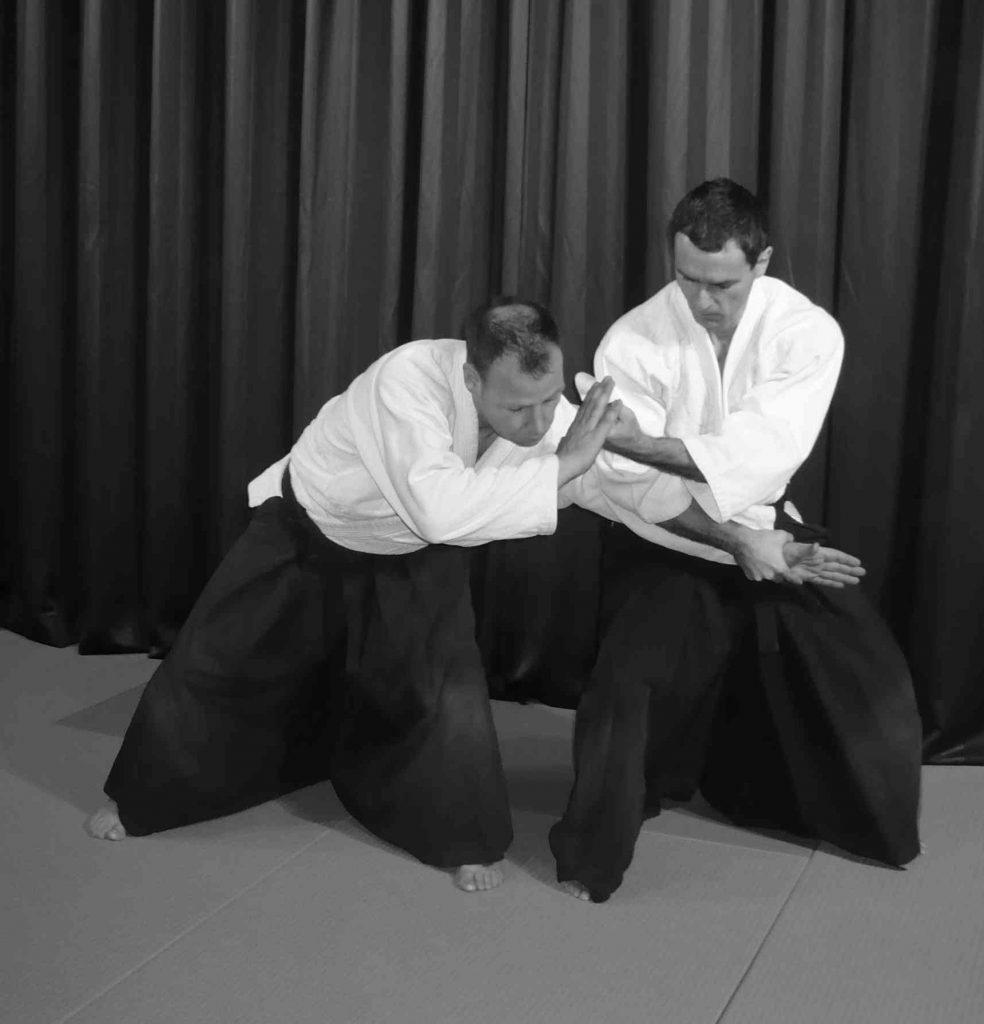